June 1, 2013, the President of the French Fencing Federation Mrs Isabelle Lamour met with the President of the Monaco Federation of Fencing M. Georges Prat to sign the new agreement linking the two federations in order to seal the mutual confidence that has always prevailed in the sporting relations between each of their Federation, and the interest which attaches to allow fencers of France and the Principality of Monaco to participate in competitions organized by each of the Federations. 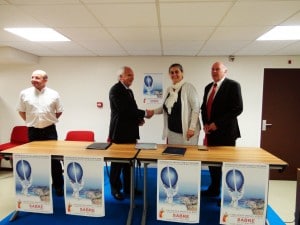